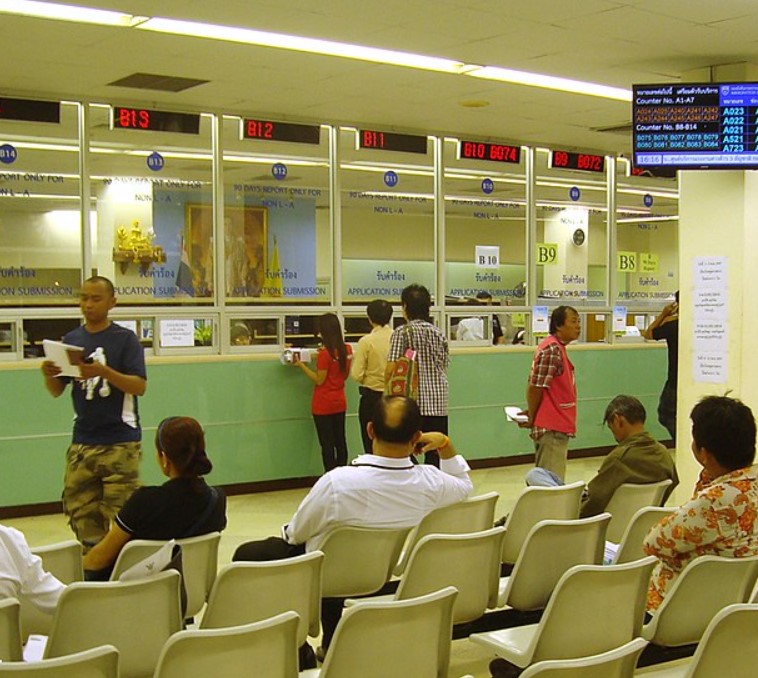 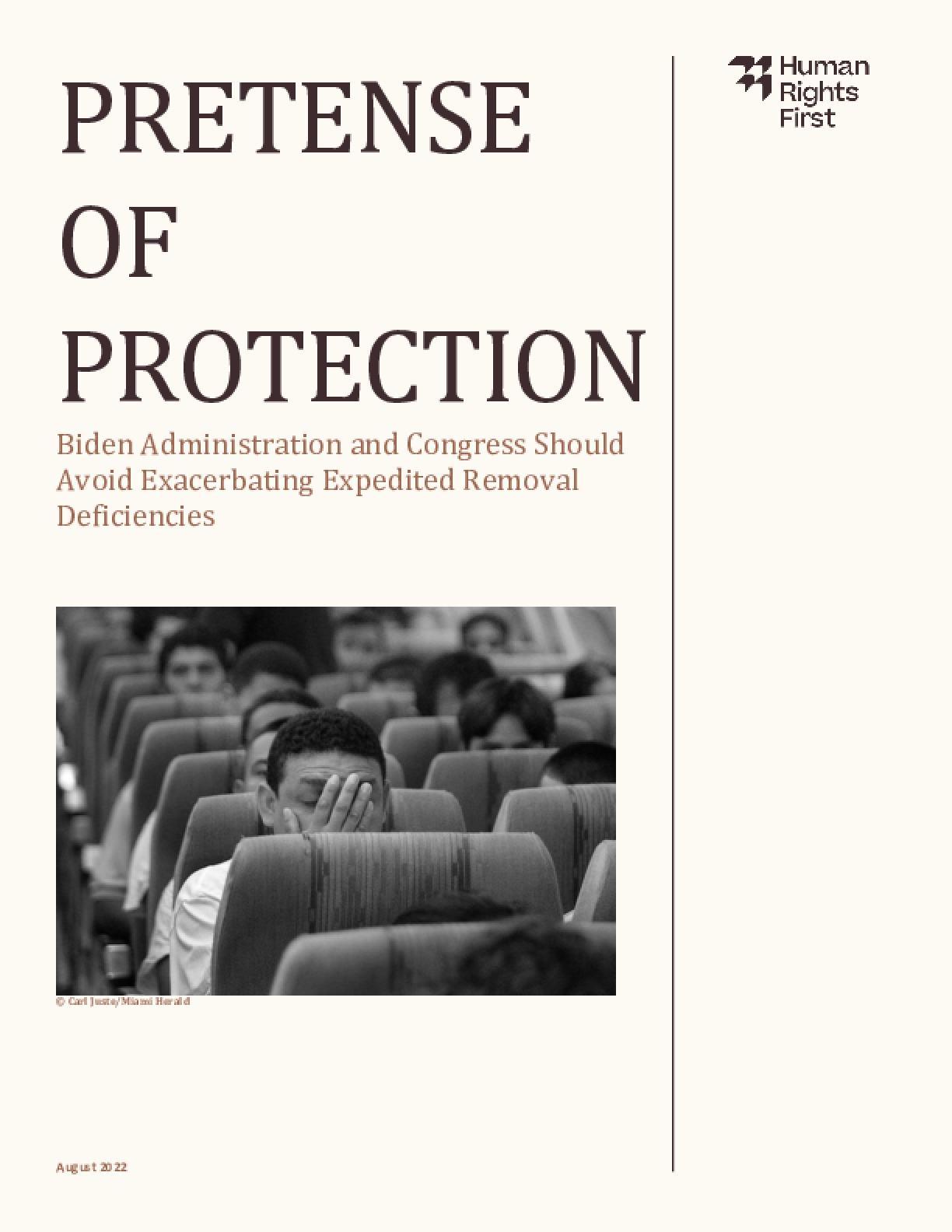 The expedited removal process Congress created permits border officers to order the deportation of certain individuals charged with inadmissibility under U.S. immigration law without an immigration court hearing. One component of this process, credible fear screenings, was supposed to ensure that people seeking refugee protection in the United States had an opportunity to apply for asylum and were not summarily deported to persecution or torture. Over the years however, the bipartisan U.S. Commission on International Religious Freedom (USCIRF) and various other organizations have documented serious deficiencies and due process concerns with the expedited removal process. Asylum seekers wrongly deported through expedited removal have been persecuted, tortured, and murdered after being returned by the United States to the country they had fled. In addition to endangering asylum seekers and violating U.S. legal obligations to refugees, the use of expedited removal wastes resources and exacerbates backlogs.Rather than use the fundamentally flawed expedited removal process, the Biden administration should instead refer asylum seekers for asylum adjudications with the Asylum Office without subjecting them to CFIs, fully restore the authority of the Asylum Office to reconsider negative credible fear determinations, and work with Congress to fund legal representation. While expedited removal remains in U.S. law, the agencies should issue regulations to reduce the risk of erroneous negative fear determinations and avoid the weaponization of expedited removal by subsequent administrations. Full recommendations can be found at the end of this report. 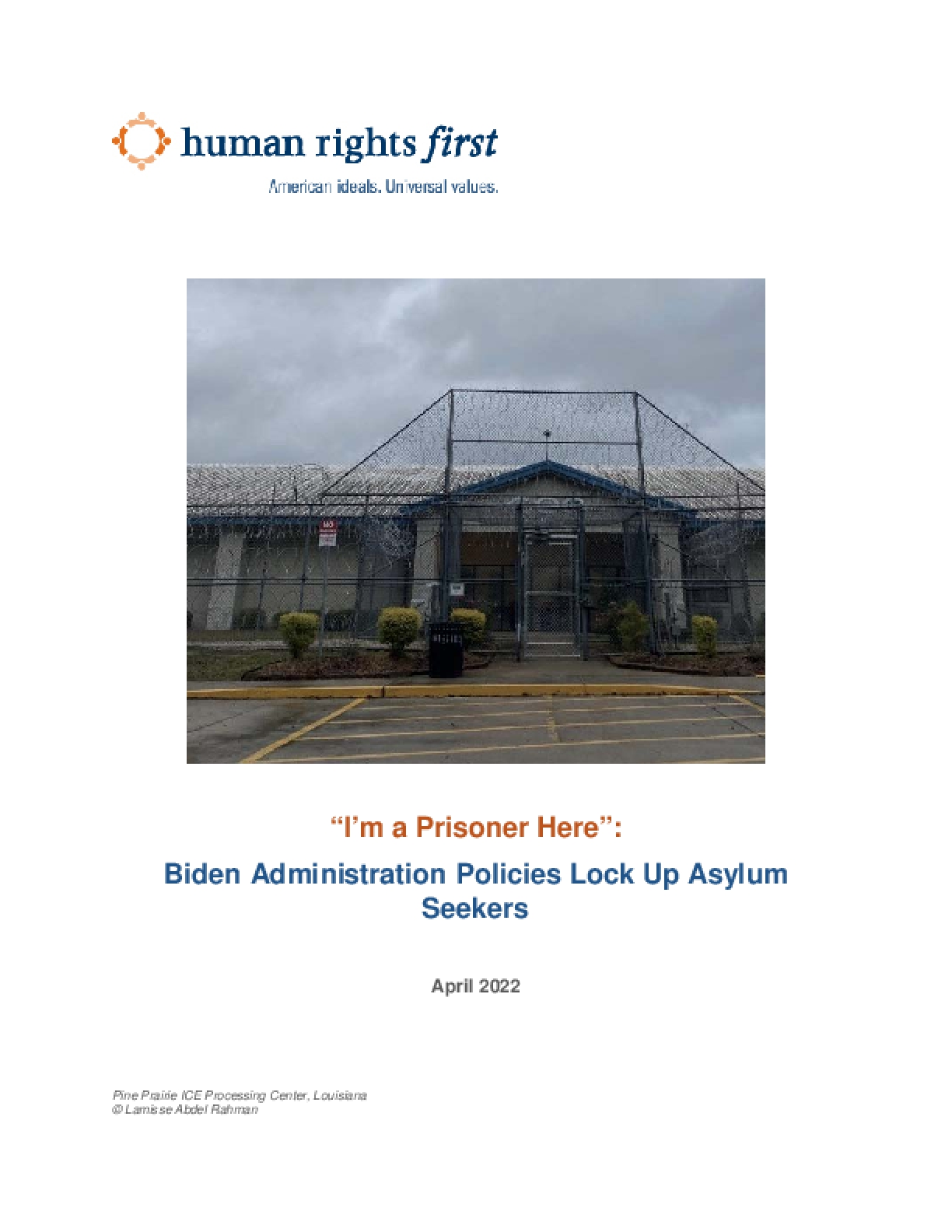 Today, the United States operates the world's largest immigration detention system—a system the Biden administration uses to jail people seeking refugee protection. While this administration is not currently detaining families and has requested a reduction in detention funding, its policy has led the Department of Homeland Security (DHS) to target adult asylum seekers as priorities for detention. DHS has perpetuated a punitive immigration detention system—converting former family detention centers to jail adults and expanding other existing facilities. As the administration restores compliance with U.S. refugee law at the southern U.S. border and ends Trump policy that illegally prevented people from seeking asylum, it should not substitute one rights-violating policy for another. Instead, it should set an example of global leadership by ending mass detention of asylum seekers and providing a true humanitarian welcome to people seeking refugee protection at the border.This report is based on information about 270 asylum seekers and immigrants held in detention, including direct interviews with 76, information received from dozens of attorneys and detention center visitation programs, DHS data, government records received through the Freedom of Information Act (FOIA), and visits to three ICE detention centers where researchers spoke with detained individuals and ICE officials. Requests to visit five additional facilities were denied by ICE. Human Rights First interviewed or received information from asylum seekers, attorneys, and other monitors related to asylum seekers and immigrants held at 49 facilities in Alabama, Arizona, California, Colorado, Florida, Georgia, Louisiana, Massachusetts, Minnesota, Mississippi, New Jersey, New Mexico, New York, Oklahoma, Pennsylvania, Texas, Virginia, and Washington. The report is also informed by Human Rights First's decades of experience providing pro bono representation to asylum seekers, including those held in immigration detention, and its prior research and reporting on U.S. detention and parole of asylum seekers, including reports issued in August 2015, July 2016, February 2018, June 2018, and January 2019. A full description of Human Rights First's research methodology is included at the end of this report. 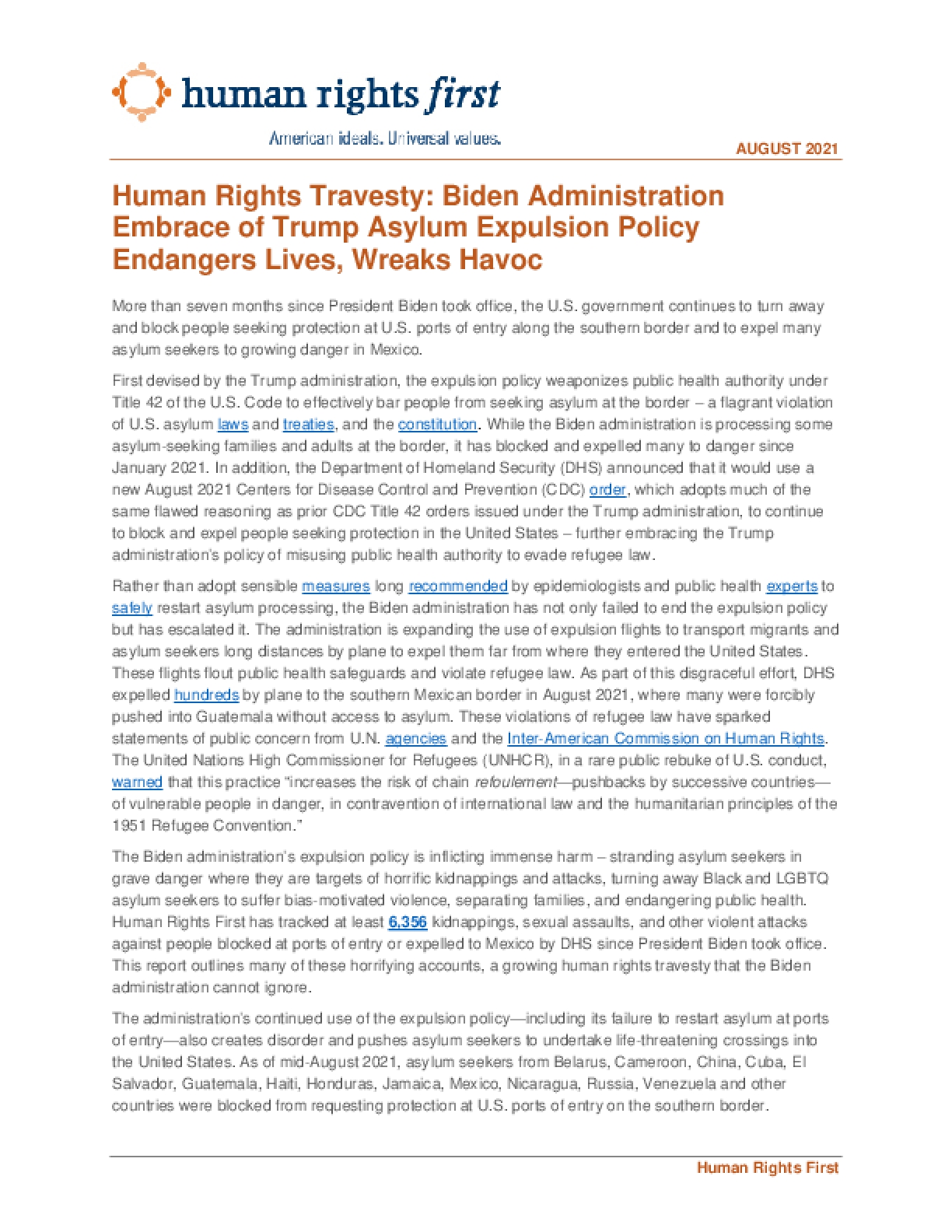 More than seven months since President Biden took office, the U.S. government continues to turn awayand block people seeking protection at U.S. ports of entry along the southern border and to expel manyasylum seekers to growing danger in Mexico. For this report, Human Rights First researchers conducted in person and remote interviews with migrantsand asylum seekers, government officials in the United States and Mexico, attorneys, academicresearchers, humanitarian staff, and other legal monitors. Researchers spoke with 65 migrants andasylum seekers in person in the Mexican cities of Reynosa, Nuevo Laredo, Piedras Negras, and CiudadAcuña in August 2021 and more than 50 additional interviews with migrants and asylum seekers inMexico were carried out by telephone between July and August 2021. Interviews were conductedprimarily in Spanish with a limited number in English. The report draws on data from an electronic surveyof asylum seekers in Mexico conducted by Al Otro Lado between June and August 2021, as well asinformation from U.S. and Mexican government data, media sources, and other human rights reports.